You are in [People] [Hungerford Characters] [Samuel Chandler]

[This article is a brief summary of the long Wikipedia article]

Samuel Chandler (1693 – 8 May 1766) was a British Nonconformist minister and polemicist pamphleteer. He has been called the 'uncrowned patriarch of Dissent' in the latter part of George II's reign.

Samuel Chandler was born in Hungerford, the son of Henry Chandler (d.1719), a Dissenting minister, and his wife Mary Bridgeman. His father was the first settled Presbyterian minister at Hungerford since the 1689 Act of Toleration.

In or around 1700 the family moved to Bath, where for the remainder of his life Henry ministered to the congregation that met at Frog Lane.

He was the younger brother of the Bath poet Mary Chandler, whose biography he wrote for inclusion in Cibber's The Lives of the Poets (1753).

As a child he displayed an 'early genius for learning', and this was encouraged by his family. He excelled in the classics and is said to have already mastered Greek by the time he entered the dissenting academy at Bridgwater, where he was a student of the Rev John Moore (d.1747). He later attended Samuel Jones' academy at Gloucester. Here he was a contemporary of Bishop Butler and Archbishop Secker, who in spite of their later churchmanship and high preferment remained life-long friends. 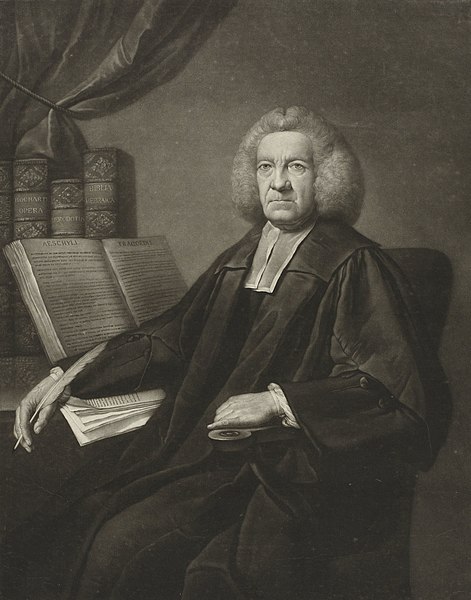 Samuel Chandler (portrait in the Rijksmuseum)

In 1714 Chandler began a preaching ministry in London. During this time he shared a house with Secker, who had returned to England after studying in Leiden. In 1716 he was chosen as minister of the Presbyterian Hanover Chapel in Peckham and ordained in December of that year.

On 17 September 1719 Chandler married Elizabeth Rutter at St Giles, Camberwell. Elizabeth was the daughter of Benjamin Rutter, leather dresser of Bermondsey, and his wife Elizabeth. They had six children: Elizabeth (d. before 1772), wife of Thomas Mitchell, tailor of Bucklersbury, London; Sarah (d.1791), wife of the classical scholar Edward Harwood (1729-1794); Catherine ("Kitty"), wife of William Ward, packer of Sise-lane, London, and Mary ("Polly"), who remained unmarried. His two sons pre-deceased him.

Through the South Sea Bubble crash of 1720 Chandler lost the fortune which his wife had brought to their marriage. This left him in straitened circumstances, and from about 1723 he supplemented his income by working as a bookseller at the Cross Keys in the Poultry, London. In 1725, having read his recently published Vindication of the Christian Religion, Archbishop Wake wrote to him expressing surprise that 'so much good learning and just reasoning in a person of your profession, and do think it pity you should not rather spend your time in writing books than in selling them'.

It was partly due to the success of Vindication, which brought together sermons he had delivered at the Old Jewry meeting house in defence of Christian revelation, that Chandler was invited to be the assistant minister under Thomas Leavesley at the Old Jewry in 1726. During this time he continued to preach at Peckham. In 1728 he was appointed pastor at the Old Jewry, the congregation offering him an extra £100 a year on the condition that he give up bookselling. He held this position for the rest of his life.

Over time he came to play a leading role in the affairs of London Dissenters. From 1730 he was a member of the Presbyterian Board, and from 1744 of Dr Williams's Trust. It was largely as a result of his influence, particularly among wealthy dissenters, that a relief society for widows and orphaned children of Protestant dissenting ministers was established in 1733. In a similar way he co-ordinated the formation of The Society for the Propagation of the Knowledge of God among the Germans, formed in 1753 to assist German dissenters in the British colony of Pennsylvania.

Chandler was an extensive writer, and through his pamphlets, sermons and letters he engaged energetically with the religious disputes of the day. He was an impassioned proponent of civil and religious liberty, advocating freedom of conscience and the appeal to reason in matters of belief.

Chandler died on 8 May 1766. During the last year of his life he had suffered from re-occurrences of a 'very painful disorder'.

He was buried in what became the family vault at Bunhill Fields in London on 16 May.