Welcome to the Virtual Museum for Hungerford
The website for all of Hungerford's fascinating history.

Read the stories behind the People, Places and Events of the area. Use the Timeline to follow events from the Roman period to the present day. Try one of the Themed articles, look at the Artefacts, our Archive of over 12,000 photographs and maps, over 1,900 documents, or Search all 1,600+ pages for a topic of your choice.

Whatever you do, enjoy your visit!

There is no museum building in the town, but the Hungerford Historical Association is committed to providing information on Hungerford's history by means of this virtual museum. If you can help, maybe by allowing us to include artefacts in your possession, or if you have any other comment, contribution or correction to make, please This email address is being protected from spambots. You need JavaScript enabled to view it..

Recent additions and updates to enjoy:

What's going on at the Littlecote Roman Villa?

Since March 2019 members of the HHA have been helping to restore Hungerford's great local Roman villa - at Littlecote House. The volunteers have held working parties to clear the walls of the villa from the moss, grass and weeds that had started to cover and obscure them. After all, it is 30 years since they were restored! 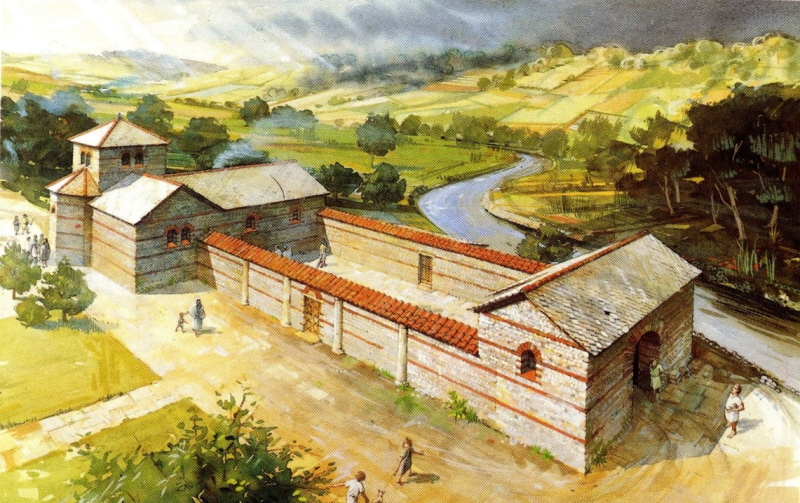 We are shortly to start cleaning and restoring the wonderful and nationally important Orpheus mosaic, which is also showing serious signs of deterioration.

If you are interested in helping the project, please This email address is being protected from spambots. You need JavaScript enabled to view it..

The Virtual Museum has a great collection of around 20 historic videos. Many of these relate to past Hocktide festivities, but there are many others to enjoy.

In the archives were three ragged press cuttings from 1963 when a man who signed himself "Jimmy" wrote of his adventures growing up as a child in Hungerford in the early 1900s.

They provide a wonderful insight into the characters, activities and life in Hungerford in the first two decades of the 20th century. They are not long!

Dr David Cave and his wife Pat moved to Hungerford in 2015. He is a retired GP who has a keen interest in both local history and in photography.

One of the many projects he developed was a plan to make a photographic archive of all the businesses in Hungerford in the year 2016. His archive of 244 photographs makes a wonderful record of the town at this time.

He kindly presented the entire collection to the HHA, and we are pleased to make it available here.

Follow this for David Cave's Photo Archive of Hungerford businesses in 2016.

Ron Scott gathered a large collection of copies of old photographs on a variety of subjects. Most were local views of Hungerford.

This is his collection of 96 copies of photographs showing old farming ways. Many of them were taken on local farms including Radley, Littlecote and Oakhill. Most are undated. For some there are interesting notes of the animals, people or machinery involved. A great insight into lost country ways.

The iconic K6 kiosk, designed by Sir Giles Gilbert Scott is now the only one remaining in Hungerford. Read all about it and learn where there used to be other kiosks in Hungerford.

This wonderful collection of more than 5,500 photos creates a unique and comprehensive record of Hungerford's life for well over a decade between 2006 and 2019.

They include many of the special events that make Hungerford a wonderful place to live in and include dozens of HADCAF Arts Festival events.

Enjoy them! They are an amazing collection!

He has been kind enough to share much of his large collection with the Virtual Museum.

PC Ron Hoyes and his colleagues became famous for the wonderful display they created decorating the Hungerfrod Police Station. This is a video clip [5mins] from Gardeners' World in August 1992 which tells the story.

There are many other great videos of Hungerford to watch too!

Follow this link for PC Ron Hoyes and the garden at Hungerford Police Station.

Just added to the Virtual Museum is a large photo album presented to Rev Anstice on his retirement. The remarkable album includes 96 photographs of teachers who had worked at the Sunday and Day Schools between 1867 and 1894. The album was nearly destroyed in 1990, but thankfully was saved for posterity. The article includes some wonderful notes made by Mrs Barbara Hope in 1990 when she was aged 90 years.

The Woodham family ran their clock and watchmaking business from the lovely timber-framed property that is now 1 High Street for over 150 years, from 1737-1892. The business had been started by Edward Woodham, but in 1777 it was taken over by his eldest son James Woodham who had apprenticed in London and was well renowned. In turn his own son, another James Woodham took it over in 1809.

The business was well established and very successful. However, this success brought with it the real threat of burglary. One such burglary took place on Friday 14 Oct 1831. The main article includes a summary of the story as well as transcripts of the Reading Mercury reports. There are some interesting twists! Enjoy.

Read all about it at Burglary at James Woodham's watchmakers, 1831.

1721 – 300 yrs since the brutal murder of William and Ann Cheyney in their home in High Street.

1746 – 275 yrs since the road through Froxfield and Savernake to Marlborough was upgraded to a turnpike.

1846 – 175 yrs since the earliest mention of the Royal Berkshire Yeomanry was first mentioned.

1921 – 100 yrs since Caleb Camburn retired from the All-Age Council School.

1971 – 50 yrs since the huge railway accident at Hungerford station.

1996 – 25 yrs since the Ambulance Station closed in Hungerford.