You are in [Events] [First World War]

The First World War and Hungerford:

Hungerford was heavily involved during the First World War as a gathering point (mobilisation station) for many Companies of the Royal Army Service Corps (Mechanical Transport) division.

A VAD Hospital was established in the town, and 76 Hungerford men died in the war, and are remembered on the War Memorial in Bridge Street, and other memorials in the town.

Constable Louis Beard's announcement of the Public Thanksgiving Service for the Return of Peace, 6 Jun 1919.

Corn Exchange set out for the Peace Celebration Dinner

- Constable Louis Beard's announcement of the Public Thanksgiving Service for the Return of Peace, 6 Jun 1919.

- Corn Exchange set out for the Peace Celebration Dinner

The onset of war:

The First World War began during the summer of 1914 following the assassination of the Austrian Archduke Franz Ferdinand and his wife on 28 June 1914 when they were visiting the Bosnian capital, Sarajevo.

Follow this link for more interesting facts about the First World War - Did you know?

Hungerford was in an ideal position:

Britain's regular army was just 247,000 men at the onset of war, compared to Germany's 1.75 million conscripts. Lord Kitchener became Secretary of State for War, and immediately set about expanding the British Army by 500,000 men.

Hungerford (and Marlborough) were in an ideal position to be training locations for the units as they developed. They both had wide High Streets, large areas of common land and they lay on the maion route from London to Bristol and the Avonmouth docks.

The Notts and Derby Mounted Brigade:

On Sat 17 Oct 1914 the newly formed Notts and Derby 2nd Mounted Division arrived in Hungerford. The CO established his HQ at Eddington Mill. 2,000 troops were billeted in the town and in various local farms. The Brigade's Army Service Corps was quartered in Hungerford. Church House was used every Sunday evening for refreshments and entertainment. More troops continued to arrive at Hungerford, and on Wed 4 November a big Field Day was held on the Common in which 2,000 men took part, watched by large numbers of local people. On Mon 16 November, at very short notice, the Brigade left Hungerford by train for its new HQ at Cromer. (For more see "The Western Kennet Valley in the Great War", by Roger Day).

The Derby Daily Telegraph reported on 7 Nov 1914 the "Pleasant Experiences" of some of its local troops when they were stationed in The Bear yard. A billiard match was arranged between the Derbyshire men and the Hungerford Club, and it was noted that the Rev WETS Gray and friends of the parish church were "untiring in their efforts to provide recreation and amusement for the troops in the vicinity." "Among the troops are several fairly good singers and musicians, and their efforts also help the time along very agreeably". See "Derbyshire Men at Hungerford - Pleasant Experiences".

The town returned to normal after the Notts and Derby left. However, the Town Council decided to write to the Secretary of State for War offering the town to billet soldiers. The letter was accompanied by a petition signed by local people.

This appears to have had the dsired effect, because towards the end of January 1915  the military authorities asked if billets could be made available for 400 men and 30 horses from the Army Service Corps.

So, in January 1915, a newly-formed army unit, the 180 Company, Royal Army Service Corps, Mechanical Transport, began arriving in Hungerford, which was to be its mobilisation station.

Initially the unit was small, with one officer and 32 men, with one car, two motor-cycles and 15 lorries! During February a further 28 lorries arrived, the vehicles being parked in the High Street. The men were billeted in private and public buildings, with a daily allowance of 3s 4d per man, later reduced to 2s 6d. An unused shop in the High Street was the Company Office, and The Croft was used as their parade ground. As the size of the unit grew, the main camp was established on the Common.

By 10 May the unit was complete and fully prepared for battle. There were nearly 500 men and 95 vehicles.On 26 June, to help acclimatise 180 Company for front line service, all men were oredered to leave their private billets in the town and live in their vehicles, which were now parked on the Common. Three weeks later orders were received that they would be leaving for Avonmouth Docks on 23 July.

From 7am the whole company assembled in the High Street and at 9am, watched and cheered by the whole town, they set off on their way to Avonmouth, bound for France.

Follow this link for more on the 180 Company, RASC (MT) written by John Parry. For more see "The Western Kennet Valley in the Great War", by Roger Day.

Follow this link for a personal account by Pte James McInnes of his time in Hungerford as part of 180 Company, RASC(MT).

The large First World War Photo Gallery includes a photograph of 180 Coy, probably on the Common in Jul 1915. It includes 333 soldiers (kindly given by Adrian Gilmore of Hungerford Arcade, May 2016).

Whilst in Hungerford, the the 18th Ammunition Sub-Park unit produced one edition of what was intended to be a regular monthly magazine. They entitled it "At the Back of the Front". It includes a nice introductory letter expressing a kind thought about a creche for Hungerford, and an uncompleted poem by "Y.L.O.R.". Due to a shortage of paper, a second edition was never printed.

Other RASC (MT) Companies in Hungerford:

The 180 Coy was just the first of several Companies stationed in Hungerford during the First World War. Roger Day (in his excellent book "The Western Kennet Valley in the Great War") includes detailed information and photographs on 180 Coy in Hungerford, as well as:

Kathryn Atkin emailed (April 2021) to say "I have a postcard sent by Sidney Taylor (689 Coy ASC MT) to his sister Miss Elsie Taylor, Beechwood St. Leonards Rd. Windsor Berks. It is a post card of the entrance to the Royal Edward Dock, Avonmouth. It says:
"Dear Elsie, We shipped all the lorries today but there is only about 30 men going with them, the remainder of us are going back to Southampton, where I expect we shall embark. We don’t know when we shift but will write if poss. Isn’t it ripping to keep shifting about like this? Love to all Sid."

Lorry and car crash at The Bear Corner, August 1915:

On Saturday 14 August 1915 an Army lorry from 339 Company was in collision with a Humber car beloging to a Mr Lewis Jessop from Wellingborough, Northamptonshire. The accident occurred at the Bear corner and both vehicles crashed through the plate glass window of Stradling and Plenty's cycle shop, upsetting can of petrol and sending cycle parts flying in all directions. (With thanks to Roger Day). 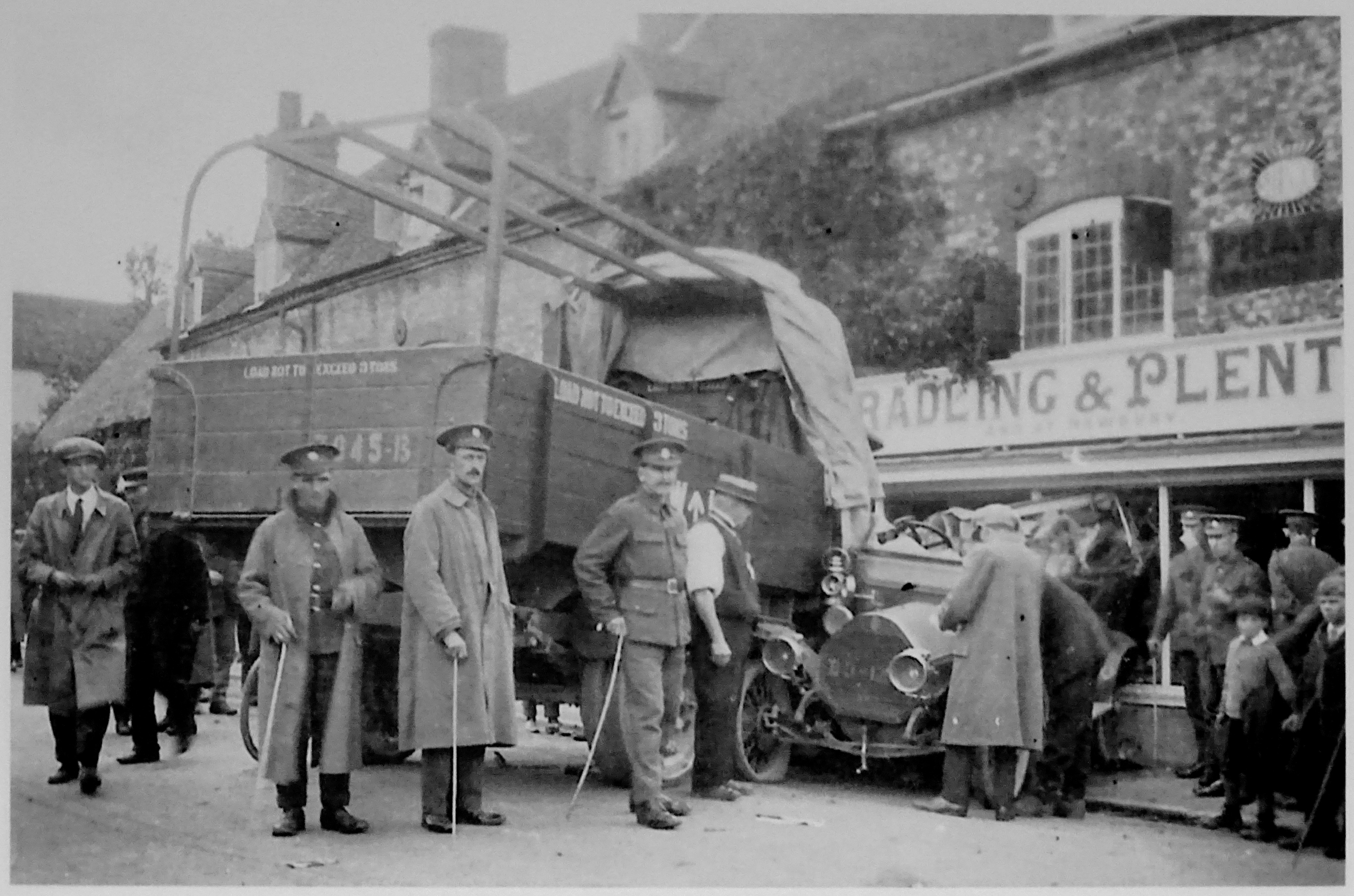 Roger Day, as part of his ongoing research into military matters, researched a photograph (a similar copy is shown in the First World War Photo Gallery) of 689 Coy, ASC MT on the Common in 1916 ("No 1").

The photo was taken by Albert Parsons. It shows Albion 3 Ton lorries and tents on Hungerford Common. On the reverse is a message written by Sidney Taylor who has helpfully highlighted his tent with a blue pencil mark and addressed the card to his father in Windsor.

From this limited information i.e. soldier's name, unit and father's address, Roger was able to trace Private Taylor's WW1 military service. Before the war he had served for over two years as a driver with the Territorial Force.

On 5 Aug 1914, the day after Britain declared war on Germany, he was mobilized as part of the South Midland Divisional Supply Column (Motor Transport) Territorial Force.

On 16 Mar 1915 he joined the regular Army Service Corps (ASC) at Bulford and ten days later was sent to France where he served as a driver with 328 Company ASC.

On 28 May 1916  he was back  home  in England,  but his service record does not reveal the reason for his return.

However, we know that he was now serving as a driver with 689 Company  ASC, which  from  11 Jun 1916 until early August was camped on Hungerford Common - it was during this period that Private Taylor sent the postcard in question.

689 Company left Hungerford on 8 Aug 1916 for service in Salonika and no more is heard from Taylor until 21 Oct 1917 when he was admitted to the 33rd Stationary Hospital with a hernia. This seems to have finished his active service and during April1919  he was discharged from the army at Fovant, Wiltshire, and the following month awarded a 30% pension.

The VAD Hospital set up at the old National School: In 1914 there was no Ministry of Health and no one had overall control of the hospitals, however the British Red Cross Society, founded in 1870 linked up with the order of St John of Jerusalem in 1909 and formed the organisation known as the Voluntary Aid Detachment or V.A.D. for short.

During the War, the old National School building (42 High Street, now Dickins, Hopgood, Chidley, solicitors) was used as a convalescent hospital for nursing wounded men who had been sent home from the Front. The building was refurbished for its new use, with three small wards and a kitchen. There were about twenty beds, and most patients were Australians based at Tidworth.

Follow this link to find out more about the VAD Hospital.

The air crash at 26 High Street:

In 1917 an air crash occurred in Hungerford and was reported in the NWN on 31 May 1917 (p7). A plane piloted by a Canadian from the RFC school at Upavon crashed in the Constable's garden on Sat, 27 May at 8.30pm, killing the pilot. The Constable (T W Alexander) presided over the inquest the following Monday.

Follow this link for more on the plane crash in the High Street, May 1917.

On Sunday 6 June 1919. The Constable, Mr Louis Beard (of the coal yard in Bridge Street), arranged with the vicar, the Rev. Tom Gray, a Public Thanksgiving Service for the Return of Peace.

A grand Peace Celebration Dinner was held later in the Corn Exchange.

Hungerford's War Memorial was built in Bridge Street. Follow this link for more on the War Memorial Dedication Service.

76 local men lost their lives during the First World War. Further detailed information on them can be found under the War Memorials section.

Service of Commemoration to mark the Centenary of the First World War.

An inter-denomonational service was held in the Corn Exchange on 3 Aug 2014. A separate section covers a photo gallery of the Service of Commemoration and the Order of Service.

A fascinating insight into the Berkshire Yeomary in Egypt in 1916-17 can be seen in an article kindly sent to the Virtual Museum by Bob Richardson in February 2022. See The Iddy-Umpty Pierrots Concert Group.

- Service of Commemoration of the First World War (including Photo Gallery)

- Service of Commemoration of the First World War, 3 Aug 2014. Order of Service.

- First World War - Did you know? Some more things to know about the war

- Mark Pennock-Purvis, who lived in Hungerford from 1930, later in 31 High Street, served as a soldier in WW1 in France, was captured, held as a prisoner of war, but managed to escape. He wrote an account of this experience, which has been published (May 2018) by his grandson's wife Carolyn Sheircliff as "The Escape" (available on Amazon for £3.99, Kindle edition £1.99). [Copy in HHA Archive P??, kindly donated by Carolyn Sheircliff]