You are in [People] [Hungerford Characters] [James E Talmage]

He was an English chemist, geologist, and religious leader who served as a member of the Quorum of the Twelve Apostles of The Church of Jesus Christ of Latter-day Saints (LDS Church) from 1911 until his death.

A professor at Brigham Young Academy (BYA) and University of Utah (U of U), Talmage also served as president of the U of U and Latter-day Saints' University. In addition to his academic career, Talmage authored several religious-themed books, the most prominent of which are Jesus the Christ and Articles of Faith. Despite first being published in 1915 and 1899, the books remain classics in Mormon literature. An academic and religious scholar, Talmage did not believe that science conflicted with his religious views. Regarding the conflicting Mormon views on evolution, Talmage attempted to be a mediator between church leaders B.H. Roberts and Joseph Fielding Smith who disagreed about evolution and the origin of man. In addition to his academic and religious involvement, Talmage was involved in local political leadership in Provo as a city council member, alderman, and justice of the peace. 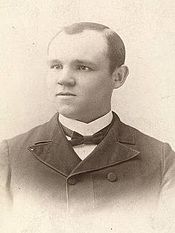 James E. Talmage, the first son of Susannah Preater and James Joyce Talmage, was born and raised in Hungerford on 21 September 1862. He was born in the Bell Inn, Hungerford (now 115 High Street), where his father was the manager. Talmage's parents converted to the LDS Church, probably in the 1850s before his birth.

Neighbours and local clergy did not like the Talmage family's membership in the LDS Church or their innkeeping business, which included serving alcoholic beverages during the temperance movement. Shortly after Talmage's birth, his family moved into a cottage in Eddington, where most of his ten younger siblings were born.

Talmage moved to Rambury to stay with his grandfather at the age of two.There he attended infant schools and received some schooling from his grandfather. He returned to Hungerford to live with his parents at age five. As Talmage was spending his time helping take care of his siblings and helping at the inn, he attending school sporadically for the next three years.

The move to America:

He was baptized a member of LDS Church at age 10 on 15 June 1873, but due to local hostilities toward Latter-day Saints, he was baptized in secret at night.

He moved with his family to Provo, Utah Territory, in 1876. In Provo, he studied at BYA

Talmage's early predilection was for the sciences, and in 1882 and 1883 he took selected courses in chemistry and geology at Lehigh University in Bethlehem, Pennsylvania.

After graduating, he started advanced work at Johns Hopkins University in Baltimore, Maryland in 1883 but later returned to BYA where he became a professor of geology and chemistry.

His career in mining:

In 1907, Talmage redirected his career from academic to the private sector, mining geology.

Talmage was the author of several religious books, including The Articles of Faith, The Great Apostasy, The House of the Lord, and Jesus the Christ

He became a member of the Quorum of the Twelve Apostles on December 7, 1911 and from 1924 to 1928 he served as president of the church's European Mission.

Views on science and religion:

Talmage was an attentive student and teacher of science, but he did not believe there was conflict between science and religion and did not worry about differences or discrepancies between the two fields of thought. He believed that with time and continued learning, these discrepancies would eventually be resolved.

- "Memorial for a famous Mormon", NWN 30 Jul 1987 - re the sarsen stone memorial on Canal Walk to James E Talmage.